What Life In Elon Musk’s Mars Colony Will Be Like 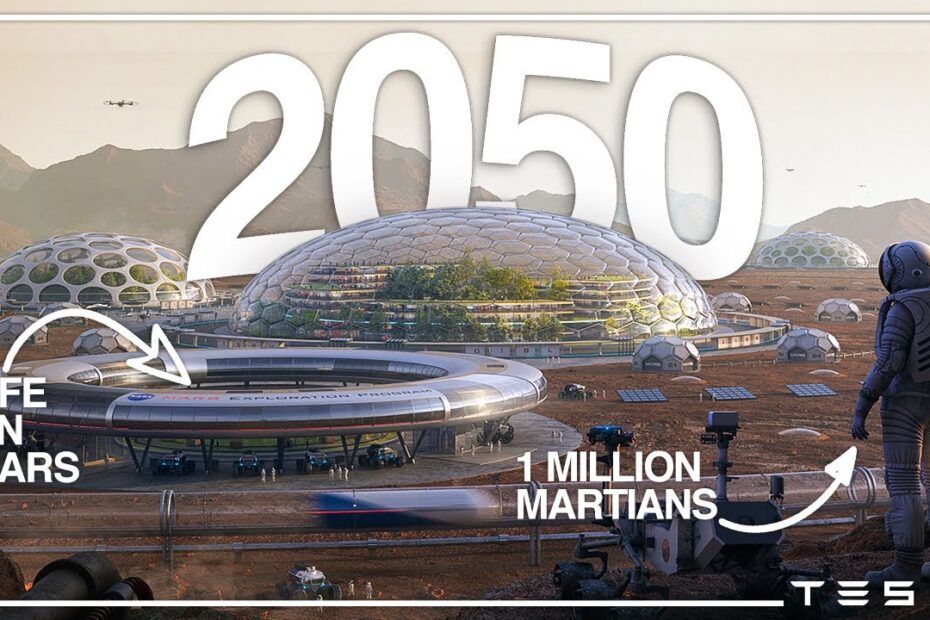 Elon Musk’s vision for life on Mars is easily the most ambitious plan laid out by any modern leader, with one million people living and working happily on another planet within the next 50 years that may be the first of mankind.

It’s a crazy idea to think of and clearly Elon Musk is not the first person to have this idea, but he is the only person who has the money and resources and the determination to actually make it happen, but for Life Mars The seeds have already been sown.

But what are we really going to do when we get there and it would be really cool to be on Mars, we’ve never done this before so no one can really say for sure but there are some really cool ideas And it’s pretty fun to think about, so what we’re going to do today is talk about life on Mars.

The basic premise of getting people and stuff to Mars is actually pretty simple and I say that only because Elon and SpaceX have already figured out that we can use the SpaceX Starship as a mode of transportation between Earth and Mars. The same rocket that just completed a successful takeoff and landing test, the SN15 prototype we’ve seen landing is very close to the final Starship product.

In fact it is actually a large stainless steel rocket ship that can take off from a planet in space and come back down again and it can do this over and over again, with only one stop to refuel between flights No such rocket has been successfully done with this. Becoming a real game changer, Starship will act as a ferry between Earth and Mars carrying some people.

But even more flights will supply. Starship can carry 100 metric tons of cargo on each flight, which, for comparison, is about 50 Tesla Model 3 cars. Son, once every two years, Earth and Mars will be at their closest points in space. Fleets of starships would travel between the two planets for seven months, the first crossing would be of only a few ships to test the waters but after a few of these cycles we would be sending thousands of ships from Earth to Mars.

We have a full length video that goes into all the details of the journey between the two planets. You can check it out for even more details but today we’re going to get right into what it would really be like to live on Mars. Apparently no one thinks Mars is going to be a nice comfortable place to live on day one but how cold will it be? The average temperature is around negative 60 °C which is quite cold even by Canadian standards, even though the planet is equatorial but at the peak of summer it can reach a maximum temperature of around 20 °C which is very cold.

I would say this has been a pretty solid tanning season at Great White Ann. Orth it’s great but that doesn’t mean you’ll spend it every day kicking back in a lounge chair with a nice drink. Mars has less than one percent of what we have on Earth, so there is work to be done. There really isn’t much to do and besides having nothing to breathe there is nothing to protect the surface of Mars from cosmic radiation which is bad.

As you see the sun keeps us alive as much as we do here on earth, it is because our atmosphere is able to block all that bad radiation that would kill us if we were exposed to it or This may turn us into superheroes but one should be prepared to find out that gravity on mars is also very light, mars is much smaller than earth so gravity is only one third as strong which is actually a good thing for us Because the human body is going to be very weak after seven months of weightless space flight.

So it will be easier to regain strength on Mars than trying to come back home after a long stay on Earth, although it’s going to be very challenging to recover from then these epic dust storms that in some cases can destroy the whole planet. Can cover, going into the dust of Mars Matt Damon got into a big problem when he was on Mars and got caught in a dust storm and all his stuff got blown away and luckily he got into me. It is being told that it was just a film and it is over.

With upward construction it’s certainly a more practical idea than trying to build a humble dome that we’ve sent from Earth like potato chips, it’s not the fancy sci-fi Martian city we imagine.

Their support for the AI Space Factory won the company a $500,000 prize in a 2015 competition to find the most promising Marshall architecture. Now we know how much Elon Musk loves tunnels, so if there is a way we’ll surely see some level of underground activity on Mars as a transportation network to move people and supplies around the colony.

Especially if we go with the idea of the egg city, not a giant dome that transports people and stuff underground that shelters them from dust storms and we have an endless array of automated robotic vehicles plying beneath the surface The whole network might be because living permanently underground might sound cool in theory but in reality the thought of actually living underground for years on another planet is enough to drive a person insane.

It probably wouldn’t be sustainable from a mental health point of view, powering a marshalling colony is a very difficult situation, the best idea we have so far is solar power, but it does present some additional challenges. Also, the energy available from the Sun on Mars is about 40 percent less than what is provided to us on Earth, so this is a major problem and even in the best case scenario we will not be able to build a colony of any reasonable size on Mars. Will get It would require a massive amount of solar panels to power it.

Then we throw in the added complexity of dust. If the colony is caught in a dust storm, the sun’s energy is depleted even on non-storm days. Dust will still regularly accumulate on top of the panels and reduce their effectiveness, so we’ll either need to deal with an automated system that will consume even more of that precious electricity or allow people to do it manually.

We could also extract hydrogen from frozen water on Mars, it’s a bit more difficult, we’d need electricity to start mining operations, so it’s probably an energy solution in the long term, but in the early days of life on Mars It’s not doing us any good. So it would be a struggle to get enough energy to power our technology or be it just so little of our technology.

Power consumption model It is possible that we can innovate our way out of this problem in the next few years, take for example the new Apple M1 chip, Apple has figured out how to use CPU GPU and RAM in a smaller way How to add C chip and it’s very powerful The M1 chip can perform as well or better than most desktop PC systems and requires minimal energy to operate.

It does not require any cooling system. It’s the new iPad Pro this year, so if we can cram a full-sized computer from 2019 into a tablet in 2021, I’m pretty optimistic that by 2030 we’ll have enough solar power to at least run a Mars colony.

The first people to land on Mars will obviously be scientists and engineers, they will have a very complex task and Elon wants to start landing uncrewed ships on Mars as early as 2024 and they’re not doing it for fun The ships are being loaded with supplies people will need to start building the Mars base.

We can even have automated systems that do the work for people before they even arrive. In the 2040s people should have opportunities to start mass migration from Earth to Mars.

Elon wants to encourage people to move the planet by offering them good jobs on Mars because they are really smart. People set things up, then you wouldn’t need to be a genius to be useful on Mars, there should be plenty of opportunities for farmers, traders, mechanics, youtubers, people want to watch some vlogs from Mars, you know that it’s going to be.

big deal when this happens your guy will probably be too old to be relevant at that point but i expect in the next few decades maybe a mars family vlog or something where earth and mars come closer than usual , the journey has been reduced from seven months to five, and people are looking at these windows as an opportunity for a great crossing.

Where huge groups of people can migrate at one time, the big one is probably going to fall in the year 2051. By that time SpaceX should have built thousands of Starship vehicles, maybe they’ve invented something better by that time, who knows and we should have a legit city ready on Mars. Live 30 years from now when thousands of people pack up and leave Earth to live on Mars.

probably forever I think you don’t factor in a return ticket for that kind of trip plus there will be people born on mars who have never seen earth which is a crazy thing to think about i don’t know what They can come to earth. A person born on Mars will be so weak that the gravity of the earth can crush his weak Martian body which is as miserable as hell.