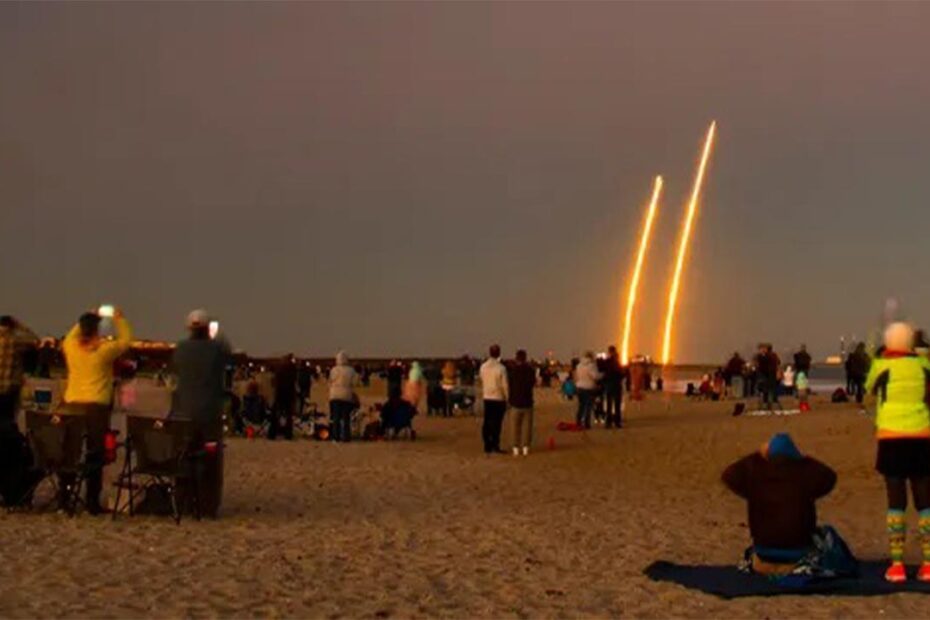 Space is important to us and that’s why we’re working to bring you top coverage of the industry and Florida launches. This type of journalism takes time and resources.

Illuminated by the last light of day, the 230-foot rocket lifted off from Pad 39A on time at 5:56 p.m. Two and a half minutes later, EST separated its two side boosters. An almost complete separation and three burns were visible to the naked eye for the landing on Cape Canaveral Space Force Station’s Landing Zones 1 and 2.

Helping visibility were ideal weather conditions, which the space force said were nearly 100% “go” just before launch. Eight minutes after liftoff, boosters on either side separated seconds apart as the rocket’s center core continued to deliver a batch of Space Force payloads, some of which were classified in orbit.

The USSF-67 mission marked the Defense Department’s third flight on the Falcon Heavy since the rocket’s debut nearly five years ago. As usual, the side boosters produced a sonic boom during their descent. They could be heard and felt, depending on location, between eight and nine minutes after liftoff. Both the boosters were carrying USSF-44, also a Falcon Heavy mission, which was launched in November last year.

The Space Force released details on two payloads ahead of launch: Space Systems Command’s Continuous Broadcast Augmenting SATCOM, or CBAS-2, which will provide “communications relay capability in support of our senior leaders and combatant commanders,” which will be geosynchronous 22,236 miles is above. To revolve around. The other confirmed spacecraft capable of carrying both known and secret payloads was labeled the Long Duration Propulsive ESPA, or LDPE-3A.

It’s not over for the heavy-lift rockets as at least three more Falcon Heavy missions are scheduled for the end of the year. United Launch Alliance is also set to launch one of its final Delta IV Heavy missions from Cape Canaveral Space Force Station in the first half of 2023.

USSF-67 marked the Space Coast’s third launch of the year. Next is slated for Wednesday, January 18: A Falcon 9 rocket will launch the DOD’s latest Global Positioning System satellite from Cape Canaveral’s Launch Complex 40 just before 7 a.m. EST. That mission is expected to involve a drone ship landing, so there will be no local sonic booms.