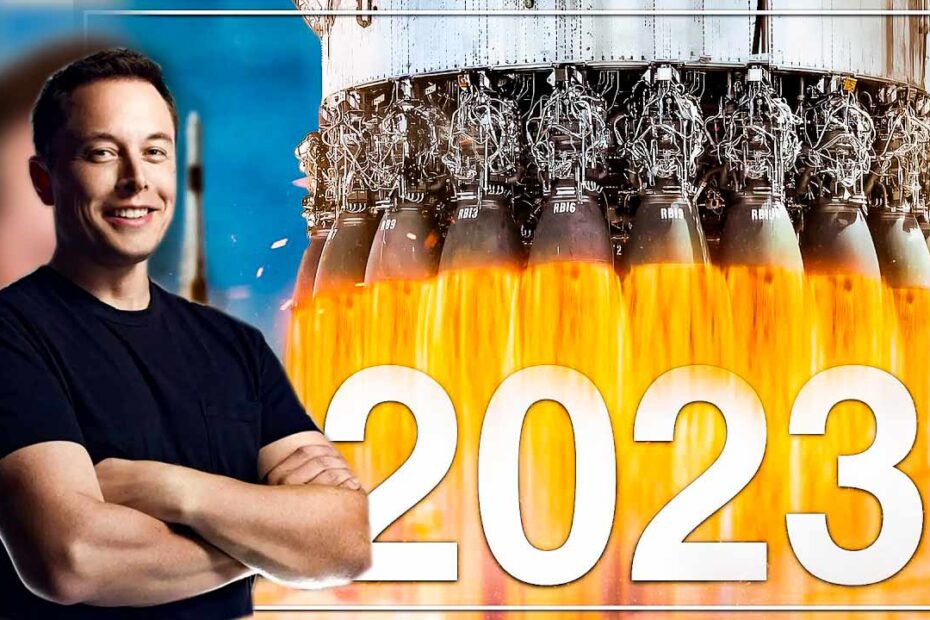 Elon Musk’s SpaceX company has the power to change the world. 2022 has been another banner year at SpaceX, we have grown the Falcon 9 to the point where it is being flown at least once per week. The year ended with a historic test flight but there is much to look forward to in 2023.

Which will take the Crew Dragon capsule to the highest Earth orbit ever and perform the first commercial spacewalk in SpaceX-designed EVA suits, we’ll see Mecca Zilla Tower and the first-ever Super Heavy landing attempt with Starship and Chopstick Arms.

The first Starship launch from the Space Coast at Cape Canaveral and we’ll see Starlink reach a new level of capability with its Version 2 satellite cluster, even for a company as ambitious as SpaceX, which only takes a year to complete. There’s a lot to do, so let’s talk about how they’re going to accomplish it in three years of design development building test blasting and more construction.

Right now Starbase Texas is winding down as we prepare for Starship’s first orbital flight attempt. Super Heavy Rocket. It’s the heaviest, most powerful rocket ever built, of course other companies like it. Dreamed up the concept design of.

SpaceX has actually built this fully reusable interplanetary heavy lift cargo ship that could extend humanity’s access to the Moon. Mars and beyond but first it will have to get off the ground and reach Earth’s orbit which again is no small feat considering the weight and complexity of the sheer size of this ship which we expect to launch next month or Elon is doing.

The end of November was predicted and we’ve generally learned to ignore Elon’s deadline for the most part, but NASA is currently predicting it as well. Starship will fly before the end of December 2022, though given his track record with the SLS, he could be as incredibly a storyteller as Elon at this point.

anyway the stage is set in starbase texas we have the mechzilla tower it has hydraulic chopstick arms the rocket boosters below have proven themselves capable of lifting and stacking starships and the super heavy booster is an orbital launch mount , which SpaceX has worked on all this year, it is more than just a stand to hold the rocket, it is a complex machine that is responsible.

to fuel the booster core spin that starts its 33 Raptor engines and then releases the boosters at the moment of liftoff as the launch mount works hard to contain the energy released by those engines, planning that orbital flight While still in the air, we know that the Starship upper stage will aspire to reach the lower Earth orbit around space.

Before they even tried it with drone ships, they wanted to see if the booster could touch down softly on the ocean surface. On its first attempt, the booster landed hard and exploded upon impact with the water’s surface and possibly overheating. What will Starship do even if the shield survives re-entry but we’ll just have to wait and find out if the super heavy booster is ready to come straight down after delivery.